Infinity Blade is an action RPG (role-playing game) video game for iOS developed by Chair Entertainment and Epic Games. It was released through the App Store on December 9, 2010. It is the first iOS game to run on Unreal Engine 3. Upon release it became the fastest-grossing app in the history of iOS, selling 1.6 million worth of US money in four days.

It has received three major updates since its release and has been reviewed favorably by gaming critics. A sequel was announced on October 4, 2011 and was released on December 1, 2011, with a triquel released on 24th September 2013. The game's dialogue is in a fictional language known as Pangean, with English subtitles.

The game follows a repetitive narrative structure in which the player ascends a large castle in a quest to battle the primary antagonist, the immortal God King (Whose name is later revealed to be Raidriar). This cycle continues every time the player falls before the God King. The player then restarts the cycle, now assuming the role of the previous game's descendant. Every time the cycle restarts, the enemies increase in difficulty. These cycles are called Bloodlines and every time a new one is started it is called a Rebirth.

The game has no virtual joystick; movement is scripted. The player taps highlighted points to move from area to area. Inside each room the player can move the camera to search for treasure and potions by swiping his/her finger across the screen.

The primary game mechanic is one-on-one combat (known as the Aegis forms) with enemies encountered throughout the castle. The player controls the character's weapon by swiping across the screen. Players can touch the bottom left or right side of the screen to dodge attacks or the bottom center of the screen to block attacks with a shield, which breaks if the player's shield stat depletes. Finally, players may parry incoming attacks when performing an intercepting sword move by swiping in the opposite direction as the attack. Each of these three counters leaves the enemy stunned and vulnerable to be counterattacked for a short period of time.

When the enemy becomes stunned and their chain is broken, the player is able to attack and deal damage to it. Once consciousness is regained, the enemy will resume the assault. In this case, the player can no longer attack unless he/she performs a scratch which only deals 1/5 of the player's total damage.

In addition to combat, there is a role-playing component. An experience points system levels up the player and the player's equipment, which consists of weapons, armor, shields, helmets, and rings. Pieces of equipment have special properties and a predetermined amount of experience points required to master them. Mastering a piece of equipment increases its sell value but decreases the potential experience that goes toward the player's level by one fifth (until a replacement item is purchased in The Store). Players gain skill points when their experience level increases or they master a piece of equipment; these points can be spent to improve the character's health, attack, shield power, and magic statistics.

The player enters the God King's chamber and engages battle with The Dark Knight as the Ancestor. When the fight is finished, the battle with the God King begins, and is lost. Many years later, Siris, now reborn, goes back to the Tower to fulfill the tradition of "The Sacrifice", where a young man is sent to battle the God King, regardless of the fact that it is a pointless tradition. Siris battles the God King many times, and one of three endings are possible. If Siris wins, he enters the God King's chamber and, using The Infinity Blade, kills him. Before dying, the God King states that "They'll be coming for YOU now...". Siris then finds a holographic image of the world before being killed by an unknown person (Who is later revealed to be Isa) and is reborn. Siris, being reborn with no memories believes the one who died to be his father and goes to find out what killed his father. In the God-King's dungeon, Siris finds a pedestal where he inserts the Infinity Blade and opens 3 dungeon doors. Inside each of the dungeon rooms Siris finds a cursed Deathless King. After killing all the Deathless Kings a large dungeon door opens. Inside this room Siris finds a lab with 7 of the God-King's buds, or dead clones floating in green tubes. Siris is then ambushed by a robot known as Zero Mech but overcomes the robot. Zero Mech is revealed to be piloted by Archarin , who was offered immortality by the God-King, which he accepted. Siris engages him in a final battle and defeats him. Archarin says "He will be back", before dying. Siris says when he comes, he'll be waiting before exiting the Citadel.

In an alternate ending, the player can choose to ally himself with the God King. 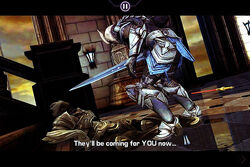 There are three endings you can get in Infinity Blade I.

While fighting the God King, during cutscene one of the battle, you have the choice to join him. If you say yes, he sits back down in his throne and says that the two of you will be unstoppable, as well informs you about other deathless that turned evil and need to be stopped. Doing this causes you to get a secret achievement. After this ending and the credits, the game resets to before the battle. The God King's level does not change.

Unlike Ending 1, you won't see credits and you will not earn any XP or cash for defeating Archarin - but it brings the game to a true ending. After the final fight, you get a secret achievment and Archarin says that "he" will be coming for what's his, and that he will be unstoppable once he gets it. After the cutscene, a screen displaying "THE END?" appears with two options:

If you choose NewGame+ you will restart from the beginning of the game with no money or gear, but keeping your level and stats, allowing you to master all items again and continue leveling up. There will be 2 more weapons in the store: Obsidian and X-SC2 ( X-SC2 is the Zero Mech's Sword, which is the second most powerful elemental weapon). You will also find other nice new items such as the Tempest, the Fusion Helmet and the Omega Armor XOS-7, all formerly worn by Zero Mech.

If you choose instead to play the next bloodline, the game continues as if you'd defeated the God King, and you retain all your gear and money. Zero-Mech is still there and you will have to fight him again in order to get to NewGame+. This provides no benefits because you won't get XP or cash for defeating Zero Mech or Archarin.

A sequel to the game, Infinity Blade II, was released on December 1, 2011. Unlike the voice acting in Infinity Blade I, the dialogue is in English during the sequel. The game reveals Siris as the name of the main character and follows his and Isa's search for the Worker of Secrets.