The first content pack update was released on October 31st, 2013. It included a new Interlude as well as a new Deathless boss and new weapons, the Infinity Swords. The Vile Set and the Stealth Set were also added in this update.

The second content pack update was released on December 19th, 2013. It was dubbed "the largest content update ever" in the Infinity Blade series. It included a multitude of new features, such as 60 new items, 3 new quests, 2 new modes (Deathless Quest and Arena Mode), 8 new enemies, 2 new gems and a new dragon, Pisci.

The third content pack was released on May 21st, 2014, five months after the second update. It brought back an old enemy, Ryth, as well as the Solar Trans weapons and a new quest. The content pack also brought new enemies, a new Deathless Blademaster known as The Collector and enabled the customization of characters.

The final content pack was released on September 4th, 2014. It added the Infinity Blade series' epilogue of what happens after the Worker's defeat. The player can now set out to confront Lelindre and learn the ultimate fate of the Ark in this aftermath storyline. This update also added the King of Dragons, Dragoor, the new dragon who dwells in the new frozen wastelands of Nafusaan. The new update also allows the player to master items up to lvl 100, obtain 6 new treasure maps, battle 5 new enemies, and collect over 25 new items for both Isa and Siris. This also includes new goals and achievements the player can earn. This is the final installment to the Infinity Blade series.

The game begins by playing a short video, Infinity Blade Origins, which explains the history of the Infinity Blade, how the Worker of Secrets forged it, and his true identity as the "Father of the Deathless" and "Creator and Destroyer of All."

The scene then shifts to the Ark, the Worker's secret lair, which Raidriar has broken into. (You play as Raidriar in the tutorial) Raidriar challenges the Worker to a battle, but the Worker summons his minions to fight him instead. Like Infinity Blade II, the scene had been described by the book and bears some difference to Redemption. However, Raidriar fights a Dreadnaught and Ashimar and after he has defeated Ashimar he picks up his weapon which happens to be a new version of The Infinity Blade. Confused, he asks the Worker why he created more Infinity Weapons.

Galath, the Worker, replies that he wanted to keep the Deathless occupied while he destroyed the world, as well as to make certain he could replicate the Infinity Blade. Raidriar then antagonizes the Worker by asking how Ausar managed to trap the Worker in the Vault of Tears if the Worker was so powerful. The Worker, unable to give an answer other than calling Ausar an "anomaly", begins the fight by summoning Ashimar's Infinity Blade to him, and throwing a blow towards the God King. It is easy to defeat Galath at this stage, but if you damage 1/3 of his health, he will automatically disarm you, similar to the The Dark Knight in Infinity Blade I. Galath will ask Raidriar to join him, but Raidriar, remembering the words Uriel told him, refuses and teleports the Worker's datapod away instead. The Worker is enraged and permanently kills Raidriar with the Infinity Blade.

The scene then switches to Siris and Isa's hideout. Isa, who has just been reborn, awakes in the rebirth chamber. Siris tells her that much as passed since she died, and that Raidriar has gone missing. He told her that he would go to Larioth, the God King's stronghold, and find him. Thus begins a series of acts and interludes playable by Siris or Isa.

In Act 2, Buried in the Past, Isa, who has recovered, is looking for other Infinity Weapons in an excavation in the Seccian Desert. She finds a vault filled with slots of various Infinity Weapons, but Terrovax stops her. After defeating Terrovax, she gains information from him about clues leading to the other weapons.

In Act 3, the Right Weapon, Isa goes to rescue Jensen, the Blacksmith, who has been captured by Raidriar. After fighting in the Broken tower, she finally finds a prison that Jensen is held in. However, a QIP abomination of Thane intercepts her, and she has to fight it. After slaying the QIP Abomination, Isa frees Jensen and the two return to the Hideout.

In Siris's Act 3, Siris heads towards the Pit, seeking Therin, the Killer of Dreams. Inside the Pit, Siris battles a Titan and a Monstrosity before fighting Therin. Siris kills Therin and takes away his Infinity Spear.

In Act 4, Revelations, Siris goes back to the castle in Saranthia in search of the Redeemer. He succeeds, and tells Eves to modify the QIP of the datapod, while telling Jensen to reconfigure the Redeemer, preparing to erase the memory of Galath.

In Isa's Act 4, she travels to the House of Kor to battle Lelindre, Mistress of the End. While Lelindre defeats Isa, she spares her and tells her the location of the secret lair of the Worker. She also gives her The Infinity Daggers.

In the last Act, Siris and Isa both head out to the Ark to stop the Worker from destroying the world. After battling Titans, Monstrosities, and even Ba'el herself, they arrive outside the Worker's "throne". The Worker tells Soulless Raidriar to defeat Siris and join him on the Ark, but Isa tells Siris to go after Galath while she stays to fight the Soulless God King. This time, in terms of stats, the Soulless God King is almost as strong as the real Raidriar, but Isa manages to defeat him, but ends up badly wounded. Siris stops Galath from getting in the Ark, challenging him to a fight. After the battle, Siris's Infinity Cleaver is parried away from him and it drops down the ledge of the walkway. Galath holds Siris by the neck, preparing to stab Siris with the Infinity Blade. However, Siris twists around and sends the Infinity Blade into Galath's chest instead. Galath mocks him, saying that the blade he created will not kill him, but Siris inserts the Redeemer inside the blade, erasing Galath's memory. Isa saves Siris by teleporting him back to the Hideout, and the world is saved.

In the post-credits scene, a child is seen building a sand castle that resembles the Worker's tower in which the Ark is held. This child is presumed to be the Worker, reborn as a child with his memories erased. If you watch until the end of the post-credit scene, you will obtain an acheivement, "Toddler of Secrets", further supporting this theory.

In the Plains of Koroth, Isa travels to the plains of Koroth in order to discover whether rumours about a cult dedicated to resurrecting Ausar the Vile were true, after fighting her way through several guards she enters an old rebirth chamber in which lies a suit of Vile Armour. She then talks to the High Priest of Ausar's cult and tells him that Ausar has already risen and that he uses another name, the High Priest denies this and fights her. After defeating the Priest, Isa starts walking to a chest next to the rebirth table, but Soulless Ausar sneaks behind her and breaks her neck. When Isa Rebirths she tells Siris that Ausar is somehow back. Siris assumes it to be a soulless copy of himself that needs to be stopped before the world descends into more chaos.

In Drem's Maw, Isa travels to Siris' home and makes sure the village is safe. After defeating all enemies in her way she confronts Minnoch, a lesser Deathless, who annoys her by saying that the people in the village are slaves ripe for the taking. Isa defeats him and kills herself by setting herself ablaze and being reborn back at the hideout. 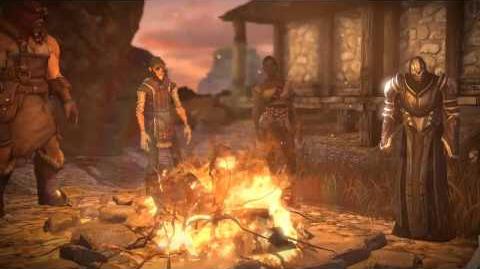