The Temple of Lantimor, also known as the Dark Citadel, named in Infinity Blade: Awakening, is the tower in which the events of Infinity Blade I took place. Raidriar, the "God King," visits the tower when the time comes to battle reborn iterations of Ausar. Players of Infinity Blade I fight through enemies to eventually reach the temple's peak, where the Dark Knight and Raidriar are found. It's also asccesible from the Ausar Rising update of Infinity Blade III, where a Soulless version of Ausar was awoken and claims the tower for himself, and Siris, the redeemed Ausar went there to face the Soulless.

The prison is a location accessible through the manhole near the gate leading into the temple. It is comprised of a small hallway with cells on both sides containing crates, barrels, and other miscellaneous items. One of the cells contains a chest that can be opened after the room's first enemy is defeated. None of them contain live prisoners.

There are two enemies that must be battled in order to pass through the prison. The first is a giant enemy - either a Warden, Executioner, or Feral Troll. The second is a dual-bladed large enemy - either a Wood Jester or a Plated Sorok. 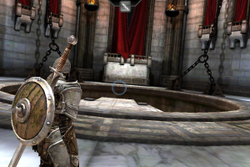 The atrium is the room in the castle that contains the elevator leading to Raidriar's throne room. It can be accessed from either the Dungeon below, the second gate, or the patio. In Infinity Blade III, this is the location which Siris fights against Soulless Ausar and bested him. There is a stairway leading to the dungeon in the middle of the atrium.

The atrium contains one giant enemy that can be battled repeatedly in a single bloodline for experience and loot. To do this, enter the dungeon after battling the enemy, and then work your way back up. This can be repeated indefinitely. 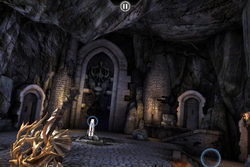 The dungeon is a large cave located beneath the atrium and beyond the prison. In the center of the room is an obelisk; if the player owns the Infinity Blade, the obelisk can be interacted with, opening three doors. These doors lead to the "soul cells" containing the three Deathless Kings - Kuero, Gortoel, and Ealoseum. When the three Kings are defeated, a large gate leading to the laboratory opens, in which Zero Mech can be found with Archarin piloting it. 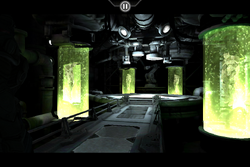 The laboratory is a room found beyond the large, central gate in the dungeon. The laboratory contains green fluid-filled stasis tubes containing what are most likely clones of Raidriar (kept for rebirth).

The door to the laboratory contains three locks. After a Deathless King is killed, one lock is opened. When Kuero, Gortoel, and Ealoseum are all killed, the door is unlocked and the player may proceed.

Inside the laboratory, Zero Mech and Archarin are battled in sequence. These are considered the final battles of the game, leading to the game's true ending.

Add an image to this gallery
Retrieved from "https://infinityblade.fandom.com/wiki/Temple_of_Lantimor?oldid=93025"
Community content is available under CC-BY-SA unless otherwise noted.