For I am Thane-first blood of the Deathless, Highlord of House Ix, and shield of the Great Pact... I will destroy your body, hunt down your bloodline, and imprison your soul for all time!

Thane is the secondary antagonist in Infinity Blade II. He is a Deathless guardian of the Vault of Tears. He refers to himself as "first blood of the Deathless, high lord of House Ix, and shield of the Great Pact". He and the other three Blood Sentinels must be defeated in order to gain entrance to the Vault of Tears.

After defeating Thane the first time, all pathways to the other Blood Sentinels are unlocked. Thane is fought again after unlocking the other three seals, and entrance to the Vault of Tears is gained. Once inside, Thane intercepts Siris and battles him a third time, but the High Lord of House Ix is far weaker than before. The fight is interrupted by the Worker of Secrets when Thane's health is reduced to 1/3, who then destabilizes Thane's Quantum Identity Pattern.

Thane wears a similar armor and helm to the Worker of Secrets. Donald Mustard (Staff of the Infinity Blade story creators) hinted in a tweet that there is a correlation between Thane and the Worker of Secrets looking similar; but gave no reason on why they are connected.

Thane wields Byzanti as a shield and Gelder as a light weapon. He can conjure ice magic in between attack chains, and attacks with his shield quite frequently. He is very easy to fight on earlier rebirths, but later in the game he is more challenging. Some of his fury chains, such as his quadruple shield bash, are almost unavoidable unless blocked by a special gem, a heavy weapon, or by dodging downwards 4 times while using a dual-handed weapon. The first time you fight Thane, he is considerably weaker than other enemies of the same level. 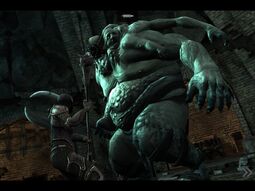 In Infinity Blade III, it is revealed that Thane was turned into a Deathless QIP Abomination as a result of having his QIP destabilised by the Worker. At starting level 50, he is a giant Titan with a grotesque appearance, fought in the Broken Tower by Isa. This is due to the scrambling of his QIP, when the Worker of Secrets touched him with the QIP destabilization ring in Infinity Blade 2. As Isa quite comically remarks in the beginning of the fight: "That's just wrong".

Thane's QIP abomination is a boss, which signifies that he will always be equipped with a boss Titan perk after level 10000.